You are here： Home» News» Global» Pay Tribute! Two Peking University legal professional practitioners were selected as the list of candidates for the "most touching strugglers"

Pay Tribute! Two Peking University legal professional practitioners were selected as the list of candidates for the "most touching strugglers"

To celebrate the 70th anniversary of the founding of the People's Republic of China, extensively carry out advanced model learning and publicity activities, and organize the “most touching strugglers” learning and publicity activities according to the unified deployment of the central government. The public announcement of the " most touching strugglers " proposal refers to the selection of recommendations by various departments in various regions, online voting by the masses, centralized review by the organizing committee, and careful review by the relevant departments of the central and state organs, resulting in 300 " most touching strugglers " candidates. Including 278 individuals and 22 collectives, the candidates cover the heroic models that have emerged in different historical periods in the 70 years since the founding of New China, loyal to the party, serve the motherland, take root and serve the people. 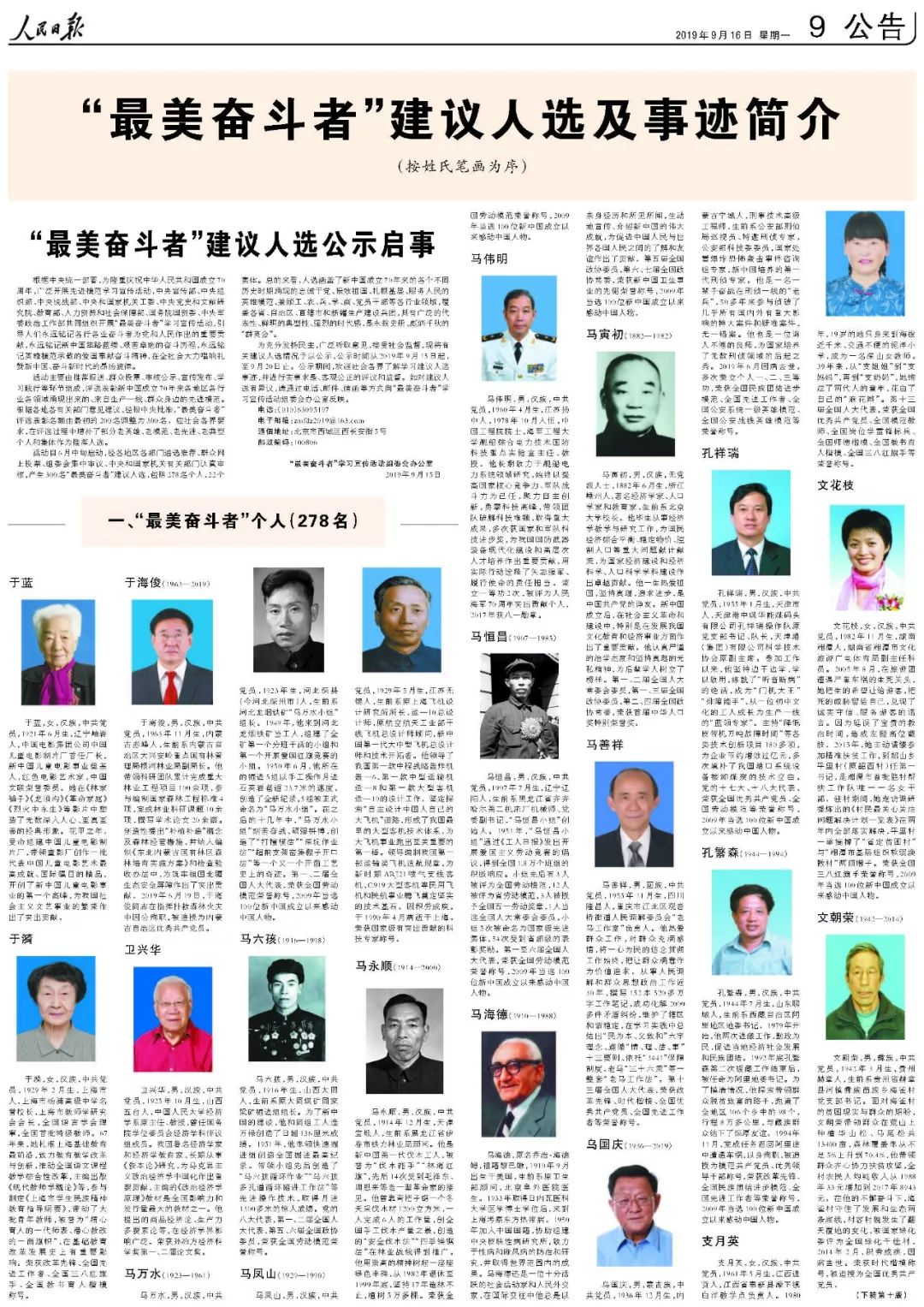 1984-1988, graduated from the Law Department of Peking University with a bachelor's degree in economic law.

1996-1999, doctoral student in economic law at Peking University and received a doctorate in law.

Zou Bihua, male, Han nationality, member of the Communist Party of China, born in January 1967, Fengxin, Jiangxi, was a member of the party group and vice president of the Shanghai Higher People's Court and a member of the Shanghai Court Judicial Reform Leading Group. He introduced the Informational frontier technology into judicial reform, presided over the drafting of a number of judicial reform systems, and took the lead in proposing a project management concept for judicial system reform in the country, making outstanding contributions to the Shanghai judicial reform pilot and even the national judicial system reform. On December 10, 2014, due to public service, he dead at 47 years old. He was posthumously awarded the “model of the era”, the “outstanding communist party members of the country”, and was awarded the honorary title of “reform pioneer” and “national model judge”.

Graduated from the Law Department of Peking University in 1951

Gao Mingxuan, male, Han nationality, member of the Communist Party of China, born in May 1928, Yuhuan ,Zhejiang, professor of Law School of Renmin University of China, honorary president of China Criminal Law Research Association, famous contemporary jurist and legal educator. He is the main founder and pioneer of New China's criminal law. He participated in the formulation of the first criminal law of New China. He is the first doctoral tutor of criminal law in New China. He is the editor-in-chief of the criminal law textbook. The talent cultivation and scientific research make a major contribution.

What is the special meaning of the title of the " most touching strugglers "?

General Secretary Xi Jinping pointed out that "happiness is a struggle." The 70 years of the brilliant achievements of New China, our happy life today is the result of hundreds of millions of people working hard and working tirelessly. In every historical period of socialist construction and reform, in every inch of the land of the great motherland, people who are sweating and forgetting to fight are everywhere, leaving the glorious footprints of the strugglers everywhere. Struggling life is the happiest, and the stance of struggle is the most touching thing. The use of the name of " most touching strugglers" has a clear theme, profound connotation, conciseness and vividness, and is easy to convey. It fully reflects the deep concern of the Party Central Committee for generations and generations of strugglers, and reflects the initial heart of our party's unremitting struggle for the people and the struggle with the people. The mission reflects the extraordinary courage and high-spirited attitude of the broad masses of cadres and the masses in their struggle for a new era and the building of a Chinese dream.

What is the selection criteria for the “most touching strugglers”?

What are the outstanding features of the " most touching strugglers " public announcement?

The " most touching strugglers " announced this time are the advanced elements of various periods in the 70 years since the founding of New China. They are the basic theories, basic lines, basic supporters, and practitioners of the party. They are the unremitting struggles of the party and the country. The pioneer is the creator and guardian of the people's happy and beautiful life, and is an outstanding representative of all fronts. First, it has a distinct era. The candidates pay attention to the 70-year consistency, covering all historical periods of socialist construction and reform. There are historical models such as Huang Jiguang, Qiu Shaoyun, Wang Jinxi, Lei Feng, Jiao Yulu and Kong Fansen, as well as Luoyang, Huang Danian, Nan Rendong and Li Baoguo. Zhang Fuqing, Wang Jicai, Du Fuguo and other models of the new era. Behind each candidate, there is a wonderful and convincing story that explains the great spirit of patriotic struggle and dedication, and reveals the arduous and arduous struggle of the new China. Second, it has a wide representation. The candidates cover all aspects of reform and development, stability, governance of the party, rule of the country, and internal and external defense. It also takes into account the various industry systems of workers, peasants and merchants, covering all provinces, autonomous regions and municipalities directly under the Central Government. Most of the candidates are experienced heroes, old and advanced, old models, and enjoy high reputation in various regions, industries and fields. The proportion of gender, ethnicity, political appearance, living and deceased, local and military candidates is more appropriate. The third is a deep mass. The most important feature of the activity is the mass, focusing on the selection process and focusing on the masses. The public candidates are directly nominated by the masses and are mainly determined based on the results of the mass voting. It can be said that most of the candidates are from industrial and mining workshops, scientific research front lines, village and town communities, large and medium-sized schools, grassroots company, etc., which are advanced models that stand out in the hot practice of mass production and life, and are respectable to the masses. A role model that can be learned.